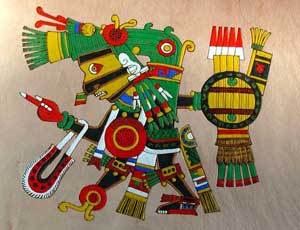 The Tetzkatlipoka Tradition is a part of the Mexihkayotl or Aztec culture and its purpose is to develop consciousness. The foundation of this tradition is a system called Nawi Ollin Teotl (Movement of the Four Energies). We are a Continuing Tradition because the transmission of our knowledge remains unbroken from the ancestors and ancient times.

There are many layers of teachers constantly instructing students from younger generations, thus even teachers have their teachers. This is how the knowledge is actively passed and it continues to be true even for instructors Ehekateotl and Tzenwaxolokwauhtli.

For over 5500 years, Tetzkatlipoka (Black Smokey Mirror) has been one of the four great traditions that arose among the people of central Mexico. It is the smallest of the four and it represents the 9% in the Nawi Ollin. It is also known as the black tradition; it’s direction is north. Members of the Tradition have always been drawn from a variety of peoples, not just Mexihka, and can include anyone from the human tribe.

The Tetzkatlipoka Tradition is not religion. This is a path to consciousness. We do not believe in a pantheon of “gods.” Instead we recognize the energies of the universe.

See the book: The Aztec Calendar, Nitrogen and Life